the dream of the World 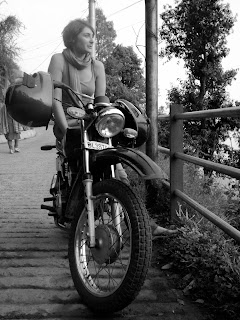 In the YMCA in Shimla I met a fellow traveller, a short, peculiar little Australian man who carries his 1kg Lonely Planet Guide Book to India with him everywhere. He’s been travelling for the past 10 years and looks close to 40 (or an unhealthy 30) and spoke only about the dangers of travelling and the bad experiences he’s had. He has a permanent superior and condescending smile on his face, but I decided that, if people were books, than likewise I would not judge this one by its cover. When he heard my planned route up North and mode of transport he tried very hard to persuade me off my plan and told me I was insane to even attempt anything of the sort. I listened to him patiently, I decided at the start of my journey that I would listen to anyone who had advice to give. He went on and on and basically listed all the reasons why I shouldn’t or couldn’t do this ‘it’s the second highest road in the World!’ he kept saying. I told him that there would always be a thousand reasons why you shouldn’t do something, and that you needed to find one reason why you can and then just do it. He smiled a sly smile (a huge gap between his two front teeth) that seemed to say ‘well good luck to you!’. I couldn’t blame him for not being able to get his mind around it, I couldn’t even get my mind around it and decided my approach would have to be to take one day at a time.

But the talk with the Australian left me a little raw. Was I completely out of my mind? I’d only ever ridden a Vespa and now I was doing the World’s second highest road up into the Himalayas on a motorcycle, all on my own! Then I went out for lunch and met Bilal.

Bilal is a Himachal Pradesch guide, and works in Shimla planning outings for tourists. When he introduced himself he looked at me and said ‘Oh wow, you ARE adventurous!’. I had yet to tell him my plan but I agreed with his assessment. After I told him what I was planning, he was oozing excitement and admiration and asked if I knew that doing this route was often referred to as ‘the dream of the World?’. I didn’t.

We had chai and he mapped out my route for me. It was basically what I had planned but with more detail and with contact numbers for cheap accommodation in that area. When we said goodbye he told me again that what I was doing was incredible and wished me a safe journey. I strutted back to the YMCA, my confidence restored, feeling on top of the World and was stopped by a local who asked for a photograph with me. These random photo-shoots happen every day about a hundred times and while usually I’d be a bit shy today I felt worthy of a photo and posed my prettiest pose. Today humility and modesty takes a backseat. Today I am a rock star.