from Mozambique to the land of the coconuts 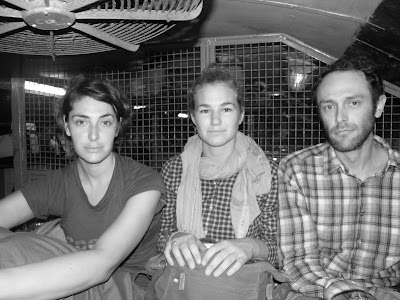 The South of India was totally different from the North but I never expected it would be so ‘un-Indian’. It reminded me of Africa rather than India and I knew I wasn’t the only one thinking that en route to Goa we must have been dropped off in Africa instead because both Mieke and my brother kept saying things like ‘this looks just like Mozambique’. Don’t misunderstand, we were not ungrateful for the experience and soaked up all that Goa and its beaches had to offer but we knew, in our hearts, that at the Southern tip of Africa (the place we get to call ‘home’) you’ll find beaches more beautiful than you can imagine. It’s just that we were expecting something else, something Indian and it was hard to see what all the Goa-fuss was about. To add to our disappointment, we discovered that most beaches were occupied by British or Russian tourists, with only a handful of locals (mostly taxi drivers and touts), so much for experiencing the local culture.

I knew exactly the kind of India my brother and Mieke were hoping to see and Goa, sadly, was not it. We also expected the rest of the way down South would be similar and thus a new plan was hatched. We gave ourselves another week in the South, then we would fly to Delhi, take an overnight train to Jodhpur and spend the last 5 days in Rajashtan (the ‘real’ India).

It took us the best part of a day but we finally had our plane and train tickets in hand and were ready to leave Goa the next day. By some twisted twist of fate, however, it started raining. And not just rain, tropical storm rain. That same day Mieke found an idyllic cabin-like beach cottage overlooking the Arabian Sea and dozens of palm trees and we were thrilled that we would be staying there for our last night in Goa. That night, we realized that the idyllic cabin was in fact a shabby little hut and we were forced to use my tent’s outer sheet inside the cabin to keep the rain out. It was leaking everywhere and everything was wet, even the bed. The next morning, after a bad night’s sleep I stepped outside and saw our neighbor looking just as miserable and sleep deprived. We were too far away to hear each other but she, very dramatically, mouthed ‘this is shit’ and I had to agree. Needless to say, we were very ready to leave Goa but we had another problem. All the trains down to Kochin (the capital of Kerela, the most Southern part of India and known as ‘God’s own country’) were full. That morning however, Mieke and I met a lovely lady who runs an Ayuverdic massage center close to our leaking little cabin who told us how to get on a train to Kochin that same day. It was risky but we were willing to try it, spending another day in Goa was not an option. The plan was to go to the train station, wait until an hour before departure, buy an ‘unreserved’ seating ticket and once we’re on board the train ask the conductor for an upgrade to a sleeper coach. The massage lady said it was easy and she does it all the time, we had nothing to worry about.

Just after midnight that same day, we got on the train to Kochin and were told, flatly, by the conductor that the train was full. No upgrade possible today. The reality of the situation hit us like a slap in the face and we sobered up to the fact that we had 14 hours on this packed train without a space to even sit (let alone sleep). We squeezed past hundreds of sleeping bodies, hoping to find a small open space, the situation getting more real with every step. Every available space was occupied (even the floors) but we eventually found a space, next to the urinals. We squeezed in and tried to get some rest looking at each other with a look that said ‘Ok, this sucks but let’s just get through it’ and I realized again that India is not for everyone. I could think of a few people who would simply have refused to get on this train. The 3 of us were made of tougher stuff and we would not be broken by another sleepless night next to a stinking, leaking toilet. In a few hours we would be hysterically laughing at this, right?

The next morning at dawn we were very rudely awakened by another conductor telling us that our ‘seating’ tickets didn’t allow us to be in this here ‘good’ coach and we had to switch to the correct one at the next station. I’d rather not say what waited for us in the next coach but thanks to Mieke’s friendly-but-firm way with people (a characteristic that I hugely admire) we found a spot, sat down and took turns sleeping until we finally reached Kochin, 7 hours later. We took a photograph which, I think, shows our mood perfectly, can you tell?.

Due to our new plans, to head up North, our time was limited and we certainly had none to waste. The minute we got to Kochin we enquired about taking a back-water trip on a house boat (again, a must-do according to the guide books) and rented 3 motorcycles (a long and frustrating process and after the day we had on the train, the last thing we needed). The next morning we left on our motorcycles for Kanikumari, the most Southern tip of India. This was something that I know Mieke, particularly, wanted to do. In that spot, 3 oceans meet and the plan was to ride down, along the coast, stopping in Kanikumari and swimming in 3 oceans simultaneously. The idea of this race down South appealed to me greatly and I was stoked that we would be going on a little mini bike trip after all. Further frustrating delays and more tropical rain stopped us from fulfilling that adventure though. A brief spark of intense FOMO (fear of missing out) took hold of us as we realized that we would have to get real and accept that we would not be able to do everything we wanted. India was simply too big and our time too short. We didn’t make it to Kanikumari but had to turn around and head back to Kochin without a swim at the Southern tip of India. Disappointment is a huge part of a true adventure, this much I know.

All in all I liked Kerela and I was happy to discover that South Indian food does not only consist of Dosas (a large, flat, pancake filled with spiced potato and served with a vegetable soup and coconut sauce). We had some amazing, colourful curries and coconut is used in everything. It was inspiring, delicious and a nice change. Kerela, just so you know, means ‘coconut’ or ‘the land of the coconut’. We were excited to be leaving the land of the coconuts and trade it for the chaotic and noisy India, the India of our dreams. Next stop, Delhi.
Posted by olga van zyl at 10:36 PM