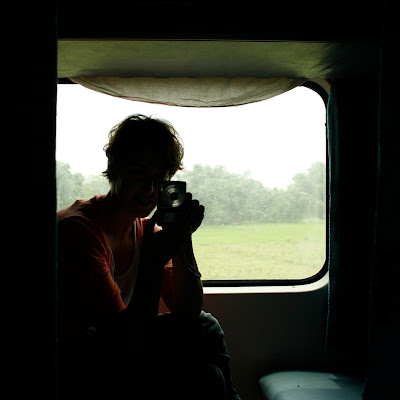 In Delhi, after catching up with everyone, happy and healthy, I started planning my next adventure. A definite advantage of travelling alone is that you can change your mind as often as you like without annoying anyone. I considered Rajasthan (in the desert) or Varanasi but it was still summer in India and even though the country was cooling down a bit those parts were still scorching. I wanted to spend some more time in the cooler hill stations, surrounded by mountains so I decided to go to Darjeeling next. I got my train ticket and then went through the hell-ish process of trying to get my bike booked onto the Rajdhani Express as well. I discovered that I would have to pay 3 different amounts to 3 different people but only one amount was ‘official’. Full scale corruption finally reared its ugly head. No-one wanted to give us a straight answer and after an hour of useless negotiation a good Samaritan, who had been watching us, came over and told us that the train to Darjeeling only stops for 5 minutes and it would be impossible for my bike to be off-loaded because there was simply not enough time and there would be nobody to off-load it. I felt like hitting someone. Don’t they know that I’m a near-broke traveler and they’re sabotaging my journey. These people knew that what I wanted was impossible but they were willing to charge me 3 times the normal price without sharing this important information with me. The injustice of it made me furious. There had to be a way, I told myself. There had to be! My mind was frantic as I was working through every option and obstacle trying to find a solution but then I had a moment of clarity and realized that I was stubbornly refusing to give up, a habit I adopted during my travels up North. There my attitude was to never give up, to endure and persevere and I knew that if I didn’t have that mind-set then, I would never have made it but it was suddenly clear that I would have to stop fighting and submit.

The Yamaha would have to stay behind for this adventure. At that the trip to Darjeeling took on a whole new dimension and I knew that extraordinary things would happen but I had to relax and let it happen.

A few days later it was time to leave and I made it to the train station in New Delhi just in time. On the platform I was looking around frantically for my coach knowing that the train only stops for 5 minutes. Through the sea of faces I saw the only other foreigner and before I could even signal to him he was already running over to me. We had less than 5 minutes to find our coaches and get on board and the platform was packed.

We ran along the train, quickly exchanged our names and nationality and peered into the different coaches until I finally found mine and got on. My companion still had to find his coach and had less than a minute to do so. We quickly promised to meet up later and officially introduce ourselves. I sat down and from my window I saw him running past me, like a headless chicken, still searching for his coach and then the train was moving and we were leaving Delhi.

I was still catching my breath and wondering if he had made it when my fellow foreigner was suddenly standing next to me and asked if he could sit down. Sure. His name was Erez and he was from Israel. We chuckled as we shook hands, both still out of breath. My coach was one class higher than his (Shallu had insisted) which just meant that I was sharing a compartment with 5 people instead of 7.

Erez and I spent the next 8 hours of the 21-hour trip having our meals together and some of the greatest conversations ever. He’d travelled in India before, 6 years ago, after his mandatory military service and was now studying engineering back in Israel.

I was very curious about the Israeli army and Erez was very kind in patiently answering all my ridiculous questions. It was clear that his military service had added significantly to the depth of his character and I loved listening to his perspective on things that I had always taken for granted or never even thought about. It was easy for me to make fun of our president and his 5 wives and 23 children, without really getting involved but for Erez politics were a part of his life whether he liked it or not. He was not a typical soldier but living in the Middle East meant that you had no choice; even Israeli girls had to do 2 years of military service when they turn 18.

Erez had been a tank operator in the army so naturally I had many tank-related questions and again he answered them all. We talked about the conflict in the Middle East, Indian food, travelling by train, electricity, Nepal and the Theory of Relativity. Later that night Erez was looking at a map of India when suddenly he looked at me and said ‘I have a crazy idea’. In that moment I knew we were going to be great friends.