the road much less travelled 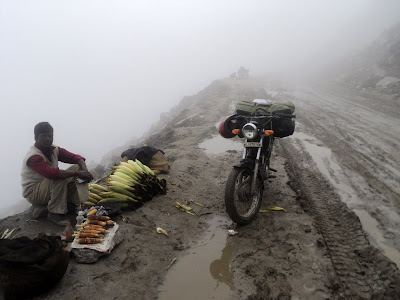 Indians are laid back but Capetonians are laid back on another level, at least Indians are practical. It wasn’t until after I’d purchased my tent that I realized that Murray and Anna and I never made solid plans to meet at a certain time or place. None of us had a mobile phone (that worked anyway) and I had no idea where they were staying. During our delirious meeting we’d neglected to get some practical information and, I don’t know, thought we’d just magically meet again. We exchanged e-mail addresses but that wasn’t helping much because internet connections had been down for days. In my mind’s eye I could see Murray laughing through his thick beard and Anna shaking her head. The best thing I could do, I decided, was to leave on the day we discussed and hopefully meet them along the way. My heart, by this time, was fully set on this route, no matter what. I had no idea what to expect but, whatever it was, it made people raise their eyebrows when I told them.

Murray had said that the first day was tough, a few river crossings and bad roads but that’s all I knew. I braced myself and set off. For the first few hours I manoeuvred, carefully, along the Rohtang Pass. This pass was always being closed, sometimes for days, because the rains make it too dangerous. Murray and Anna’s planning was perfect (well, almost) and the pass was open. It was a beautiful pass but busy, and muddy and scary. By 11h00 I turned off the pass and took the road much less travelled and headed for Spiti. The road disappeared almost immediately and was replaced by large loose rocks and more mud. Also, I was the only person on this road. 3 hours passed and I wasn’t going faster than 20km/h and still no sight of another human being. I realized that I was not going to make it to Kaza (another 120km away) and felt the first tiny stabs of fear on the back of my neck. If something goes wrong here, I’m screwed.

Just then I came to my first river crossing. My heart stopped beating and all the blood drained from my face. Then my heart started beating again, in my throat, and fast. I stopped, switched off the bike and investigated the depth and breadth of the icy river. These rivers are formed by melting glaciers so to the right of the river was a huge glacier and to the left, a cliff. I thought of the time I was heading towards a busy intersection in Delhi with 2 passengers and how terrified I was then but this was different, this was raw fear. Undiluted.

The river was knee deep (deep enough to scare the heebeegeebees out of me). I kicked the bike to life, took a deep breath and jumped, so to speak. The bike got stuck lots because at the bottom of the river there were large loose rocks but because I couln’t see them I was not directing the front wheel over them. My heart was screaming loudly in my ears and I knew that if the engine seized now I would not be able to push the bike through to the other side. Even though the bike was completely wet, the engine never died and when I finally got to the other side I felt high and was shaking, partly because the water was freezing but mostly because I was terrified.

There were 7 more river crossings, 5 of them hectic. Once the engine died when the bike fell over and I had to summon my superhuman strength to get the bike back up, finally standing next to it with the freezing water coming up to the middle of my thigh. The bike was almost completely submerged. I mounted the bike, kicked, and it started. I couldn’t believe it. Suddenly I felt like I could do anything and the next crossings, though they were terrifying, went smoother. I felt sorry for the Yamaha but I started thinking of it as my never-say-die travel companion. I felt like it was just this machine and I surrounded by the Himalayas. Nothing else existed. I even howled a few times when we made it safely through a river. I was losing my mind a little and it felt incredible.

By 18h00 I was nowhere near Kaza but I came to a small one-room hut/shop in Batal (another 80km from Kaza). I decided to pitch my tent and asked the owner of the hut where a good spot would be. He indicated to a hill and I strolled over to investigate. Behind the hill were 5 other tents and about 40 horses running around noisily. Each horse had a bell tied around his neck. I fetched the bike and before I could even untie my luggage there were 2 Indian guys standing next to me. They introduced themselves, pitched my tent (refusing to let me help) and invited me to dinner in their tent. I accepted and told them that I would come over as soon as I got clean, dry and warm. In Manali I wanted to buy these thick, hand-made, woollen socks but forgot and now I wish I had remembered. My feet were frozen and I knew it would be a long night if I couldn’t warm them up. I walked back to the hut and hooray the guy was selling them. Random. I bought a pair but back in my tent they suddenly looked more like gloves than socks (actually more like oven mitts). I needed them to be socks so I put them on my feet and to my delight they fit, like a glove.

When I stepped outside my tent a young Indian guy, Pangarg, was waiting to escort me to the dinner tent. Pangarg and his team of trekkers were taking a group a Scottish tourist on a 2 week trek through the valley and the horses were transporting all the food, tents and gear. He carefully steered me past the tent with the foreigners and led me to a large square tent. The moment I stepped inside I realized that I was the guest of honour. My seat was right next to an older Tibetan man; he was the guide (and elder) and knew the mountains and the valley better than anyone. He gave me a warm smile when I sat down. He didn’t speak any English and grinned when I greeted him in Hindi.

After I sat down I was handed a thick woollen blanket to wrap myself up in and a cup of soup. The conversation between the men started up again once I was settled in and soon they were joking, talking and smoking easily. I asked questions and got asked questions in return, with Pangarg translating. Suddenly everyone stopped talking and listened to something outside. It was the horses; they had calmed down and were now lazily grazing among the tents. I closed my eyes to listen to the bells and realized that all the bells were different sizes (or tones) and what I was listening to was a symphony of bells, amplified by the surrounding mountains. I opened my eyes and all 6 men were beaming at me with joy and pride as they saw I realized what it was that I was listening to. Extraordinary. These people, I thought, were creative in ways I might never even dream of because my life was simply too comfortable. We listened for a while and then dinner was served. It was a simple meal, rice and dahl, but it was wonderful and hot. They graciously offered me a spoon but I graciously declined and tucked in like everyone else with my hands. This got me an approving nod from the Elder.

He was wearing a traditional kullu cap (a roundish cap with green, red and orange patches) and I suddenly thought of my father (who, incidentally, is very fond of wearing hats) and wondered if he would wear such an eccentric hat. He might, I decided, if I gave it to him. Like all daughters, I am adored by my father and I felt a sudden urge to speak to him and tell him I love him and that I’m bringing him a new hat.

After dinner we talked some more and I asked about the weather. ‘Is it always this cold this time of year?’, ‘when does the snow come?’ The guide said that the last couple of years have been different and it keeps changing. Nobody really knows what to expect anymore. Seasons are longer or shorter than usual. ‘Global warming’ I said and suddenly the guide looked at me with a hard, sad face. No doubt he’d heard those words from some passing traveller but he didn’t know about climate change because he’d seen ‘an inconvenient truth’ or because MTV was telling him to ‘think green’. He knew about it because everything in his world, the sky, the seasons, the landscape was telling him that something is wrong.

We sat in silence for a while and then they asked if I would like a glass of rice bine. I heard rice wine but they insisted it was ‘bine’ and it turned out to be a lot like sake (rice wine) only much (much much) stronger and with my first sip I got another approving nod. After the rice bine and several more cups of chai I thanked them for their hospitality and Pangarg escorted me back to my tent. I couldn’t fall asleep and I remembered a conversation I’d had with a lovely Swiss couple back in Manali. Because I was heading toward much higher altitudes they warned me against AAS (acute altitude sickness) and told me to avoid drinking any tea, coffee or alcohol. I lay in my sleeping bag, giggling. Too late.

The next morning I stepped outside and Pangarg was waiting to escort me to breakfast. Had he been out there the whole night? I could imagine the guide telling him to stand watch outside my tent in case some crazed foreigner tried to harm me. To thank them I let them take turns riding the bike around the field (hilarious) and then we had a mini photo-shoot. I posed with everyone, even the horses. We said our goodbyes, they were heading to Chandertal and I was heading to Kaza, in the opposite direction.

Again I left feeling grateful for the kindness of these men and for having survived the day before. I rode past them and waved. Day 2 and still no sign of Murray and Anna and I had no idea what to expect next.