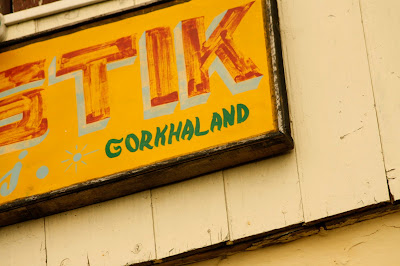 William Chase, the English tourist in my hotel, had formed a fraternity-type friendship with the owner, who for reasons unknown didn’t seem to like me anymore. The two of them spent hours, till late into the night, telling each other stupid jokes in William’s room, right opposite mine. William had a lovely room with wooden floors, a great view and beautiful Indian linen. Mine smelled funny, the light bulb worked only when it felt like it and for warmth I had only one scratchy blanket and ‘hello kitty’ sheets.

During the strike, in my hour of need, my room was a haven that I was grateful for but now in the lucid light of day it was clear that I had the crappiest room in Darjeeling. On top of that, William Chase was beginning to work on my nerves. He had a very heavy British accent (one that would indeed have made the Queen proud) and he wore a stupid Nepali hat and hundreds of prayer beads around his tiny little neck. He was supremely irritating and one afternoon he told me that a police man patrolling the streets had taken him by the arm and told him that it was best that he left Darjeeling as soon as possible. William smelled conspiracy but I knew better. No doubt he had in some way annoyed the members of the police or some merchant who had complained about him because those same police officers always greeted me with a smile and never failed to wish me a happy day. I knew that my feelings towards William stemmed directly from the fact that he didn’t share his biscuits with me during my 3 days of hunger and I decided that I needed to forgive him and move on. Easier said than done.

I had long since my arrival in Darjeeling given up hope of finding a room to rent in the tea plantations (the strike had changed everything) and decided that the moment William checked out I would ask the owner if I could move into his room. Early the next morning I heard William leaving and went straight to the owner but a quiet little Korean girl, who had moved in the day before, had beaten me to it. I sat in my crappy room and felt very sorry for myself. Darjeeling was turning out to be nothing like I expected. I grabbed my MP3 player and was heading out the door for a long, soothing walk when I bumped into Deo.

Deo was a very pretty Japanese boy (he didn’t look older than 16) and he was just checking in. He radiated goodness and was so genuinely friendly that my bad mood lifted instantly and I went for my walk feeling much better, my faith in people momentarily restored. That night Deo wanted to know where he could go for dinner. I suggested a few places and would have joined him if I hadn’t finished off 2 plates of Momos just an hour before. I also gave him my headlamp, warned him that the streets were safe at night but very dark and that he needed to be careful not to fall into a ditch (like I did, many times). Deo had a beautiful way about him and looked like a little Calvin Klein model and I could have eaten him up, he was that sweet. The next day I was coming back from one of my walks when I ran into him again. He was carrying his backpack and told me that he had just checked out and found a wonderful new place and invited me to come check it out. The guesthouse he found was in a quiet part of Darjeeling and from the 3rd floor the rooms had incredible views. The room I checked out had a 180 degree view of the misty hills and a lovely bed with soft, clean linen and it was almost half the price of my crappy room. I switched hotels immediately.

It nothing else I felt that I had survived something in this place and accomplished staying in Darjeeling longer than most passing-by travelers bumping my status from ‘visitor’ up to ‘regular’. Apart from starting to recognize and be recognized by the locals I also found a few spots that I kept going back to. My favorite place to eat was right at the top of the city hill and was run by a local woman about my age. Her name was Daneeka and she made the best momos in Darjeeling. She also sold alcohol, under the table, which made her little dhaba very popular. I went there, sometimes twice a day, because her momos were not only the best, they were the cheapest. For 20 rupees you got a plate of momos (10 per plate) and a bowl of soup. That’s about R4 for a great meal. After a few visits and some shy conversation with Daneeka, I noticed that instead of 10 momos, I was getting 11.

Becoming a regular also means that you get insight into why the locals act the way they do (I can’t speak for the Gorkhas, who knows what they’re thinking). I often saw locals harassing the poor street dogs while I roamed the markets, poking them with their umbrellas or scaring them while they’re sleeping. I felt sorry for the poor dogs but after a few days, I understood. These street dogs, always sleeping during day, are wide awake, barking loudly and viciously during the night and keeps everyone up. After a few sleepless nights I was joining the locals in abruptly waking up every sleeping dog I could find, determined to disturb their sleep as much as I could. It was not cruelty to animals, it was justice.

Nothing it seemed however could lift me out off my Darjeeling depression. Rumors started surfacing that another strike was happening soon. The locals never fully recovered their kindness after my first visit and I experienced a lack of communication, not because the locals didn’t speak English but a lack caused by the local’s unwillingness to tell me what the heck was going on. I felt like finding a loudspeaker and proclaiming to the inhabitants of Darjeeling/Gorkhaland/Whatever that all I ever wanted to do was spend time with them in their beautiful city and get to know them but their silence seemed to say ‘you did get to know us, you just didn’t like what you found’. And so Darjeeling and I broke up. The next morning I took a jeep to the station and hopped on a train. Next stop, Calcutta.