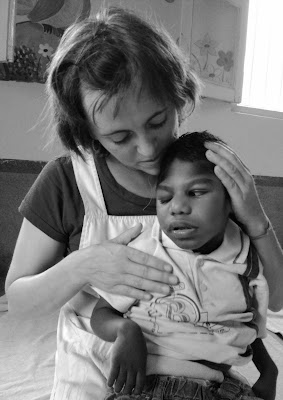 This morning I woke up feeling like I got hit by a bus. Every muscle in my body hurt and I had bruises all over. At Daya Dan, the day before, I had gone up to the roof to fetch some laundry and coming down, slipped and fell down the stairs. Now, it’s true that I do fall down often but even by my standards it was a big fall and it made everyone (volunteers, aunties and children) run to come see if I were ok. It was very embarrassing but it gave me a great opportunity to connect with Leema, the girl who called me a bad auntie on my first day, because after the fall, we were the only ones laughing our heads off.

My time at the Missionaries of Charity made me realize that people under-estimate how popular Mother Teresa was and still is (I certainly did) and I discovered that many of the volunteers had been planning for years to come to Calcutta, fulfilling a life-long dream, while others have such great admiration for her that they’ve been coming for years. My reason for coming, in comparison, was much less significant. I decided to do it, on a whim, after I read about it in a book.

I bought a t-shirt that read: ‘CALCUTTA ME MATA’. The Bengali man selling them said it meant ‘Calcutta my Mother’. As I’ve mentioned, Mother Teresa is greatly loved and admired, if not worshipped, by everyone in Calcutta and even Muslims and Hindus revere her as holy and affectionately call her ‘Mother’ (‘Mudda’). My t-shirt, I thought, was a clever reference to ‘Mother Teresa of Calcutta’ but the next day, having breakfast at Mother House, wearing my new t-shirt, I noticed several Spaniards eyeing me disapprovingly. One of them, Losia (a long-term volunteer) came over and told me that my t-shirt, in Spanish, meant ‘Calcutta kill me’. Shit. Feeling like a callous idiot, I smiled, apologetically, to the large Spanish crowd. How did I manage to put my foot in it so exquisitely and offend so many people? Of course this was a joke to me, I could hear them thinking, I’m not even Catholic. I apologized, pleading ignorance, but then I realized that Calcutta did kill me a little. Calcutta had broken my heart a little and because of it I would be bound to this cruel, crazy, beautiful city forever. But Losia seemed unconvinced, smiled a little strained and left. As she was telling the crowd about our conversation I considered slipping out the back and changing my t-shirt but it was too late. Some of the girls in the crowd were coming over. Crap. ‘Excuse me’ one of them said, ‘where did you buy your t-shirt?’

But there were, seriously, many things about this city that I was still trying to deal with. I’d seen poverty before but here I saw thousands living on the street, so underfed their bones were sticking out (an entire family, with newborn twins, lived on the sidewalk outside my hostel). At a home for the destitute and dying* I saw many old, sick people whose eyes, ears and noses had been chewed off by rats or worms because they were too weak to fight them off any longer. There was one lady that was hard of hearing and every time I said something she turned her head round to bring her other ear close to my mouth (the better to hear me with). It was completely eaten away but, ironically, it was her ‘good’ ear.

One of the things I really struggled with was Karma which, in Calcutta (like everywhere in India) was ever present. I saw it affecting people’s lives, actions and way of thinking in ways that were hard for me to accept. There is a serious lack of compassion for the poor, sick and suffering because Karma says you are suffering for something terrible they did in a past life. People live completely detached from the poverty and suffering on the streets because they believe suffering is deserved and must be endured. I even heard stories of mothers throwing their disabled newborn babies, obviously guilty of some unspeakable evil in a past life, into the river Hooghly to put them back into the Karma-wheel as soon as possible. That would be seen as the right and loving thing for a mother to do, ’karmically’ speaking. I thought of the many conversations about Karma I’d had with fellow travelers in this country and how the common perception is that Karma is a beautiful, endless cycle of life. I felt that my eyes were opened to a darker side of it.

Still, in my mind I was more prepared for the suffering but it touched me deeply that in this dark place there were people, Mother Teresa being one of the first, that were radically opposing this detached way of living by devoting their lives to loving and caring for those who suffer and I felt blessed that I got to help, if only a little. Every day was, for me, a lesson in compassion and gentleness that I was hugely grateful for. My best teacher in compassion turned out to be a Spanish woman named Rachel who worked with me at Daya Dan. Rachel’s a 40-something teenager and works as a laboratory assistant back in Spain for 10 months of the year and then volunteers 2 months, in Calcutta or Africa or wherever). I was blown away by the intimate way she cared for the children, caressing each one for however long she could, like it was her own, like that kid was the most precious person in the world to her. Rachel’s way with people touched many hearts, including mine and I found myself many times, looking at her and thinking ‘this is how you choose to spend your one holiday a year?’ How can you not be moved by that?

There were many things that I learnt here that I wanted to keep forever and never forget. I wanted it to transform my life and way of thinking but I knew that you can lose even a great revelation if you do not hold onto it and let it take root in your heart but I also knew that I was already changed, I was already different and my world back home suddenly seemed so far away and far removed from this life. Calcutta did kill me a little. The old me.

*There is a temple in Calcutta called the Kali Temple, devoted to the goddess of Death and Destruction, Kali. Many Hindus make their way to this temple to die because it’s a holy place. There are thousands of people on the streets, either dead or dying and it was here, right next to the temple despite much resistance from the government and the locals that brave little Mother Teresa set up a home. She wasn’t interested in the politics or religion of it she was only interested in giving the dying a bed, food, care and love them until they died. This is the kind of love that makes impossible things possible.