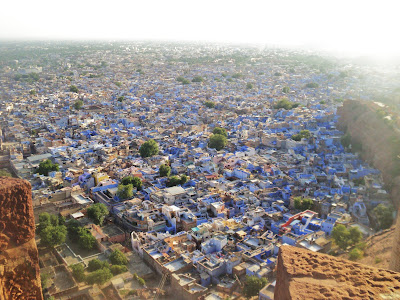 Like I said, leaving Pushkar was hard. Thanks to my guide book I imagined Pushkar to be an exotic, lush oasis in the Indian desert but on my way there I started to think that the book had got it wrong. I spent the entire day riding around what felt like the middle of nowhere (the landscape was dry, vast and barren) and I was just about to give up hope of ever reaching Pushkar when I saw a sign that read ‘Pushkar Lake’. Lake?! The idea that there could be a lake in this dry place seemed impossible but I kept following the signs and sure enough, a lake. Like most mountains, rivers and lakes in India this lake was holy (and also severely polluted). It still amazes me that a country, that views everything as holy, could have so little respect for nature. Pollution and littering is a huge problem in India and I have much to say on the subject but, for now, let me say this. I cannot and will not, ever, get used to it. It drives me crazy.

Despite the pollution, India still manages to take my breath away. This is a beautiful country and Pushkar is definitely one of its gems. Before I left for the Blue City I felt I needed to say a proper goodbye with a walk around the holy lake and chai with my new friend. Then it was time to leave and like so many times before I promised to return, someday, as I waved goodbye. My plan was to meet up with the highway again and head to Jodhpur but Dinesh told me about a better (shorter) route that would shave 60 km off my day’s riding. Like an idiot/adventurer I opted for the shortcut and spent 6 hours on one of the worst roads I’ve ever seen (all the potholes in India live on this road). I’ll admit that halfway to Jodhpur I revoked my promise to return to Pushkar and see my good friend Dinesh again. Bastard.

Eventually though I did reach Jodhpur and started the tiring process of finding a good, clean and affordable place to stay. For those who think traveling is a break from day-to-day admin, think again. I spent an hour riding through the crowded alleys looking for a budget guesthouse called ‘Yogi’ (recommended by Dinesh) but people just looked at me like I was crazy. I think some of them thought I was actually looking for a guru (‘excuse me, do you know where I can find a guru?’ ..Seriously?). I was just about to give up hope when a guy on a bike stopped next to me and asked me if I needed a room. Usually I would ignore these tout-types but I was exhausted so I followed him. I followed him to, possibly, the most exquisite (and cheap!) little hotel in Jodhpur. The guy on the bike, Lucky, was no tout, he was the owner and he was on his way to get a shave when he saw me (a damsel) in distress. Lucky turned out to be a great host and I even saw him one morning with a bucket of water, washing the Yamaha. I soon discovered that almost everyone in Jodhpur was related to Lucky in some way. He had brothers, sisters, cousins and uncles everywhere. One night I went to a totally random restaurant and had dinner and discovered that it belonged to Lucky’s sister. Even the hotel I ended up staying at in Jaisalmer belonged to Lucky’s cousin.

Thanks to Lucky and the beautiful blue buildings, I loved Jodhpur. It’s hard to speak about this place without sounding like a tour guide but Jodhpur is gorgeous. Spices, sweets, sugar cane juice, incense, perfume and more famous saffron lassi (again there were 2 identical ‘famous’ lassi shops right next to each other) was a feast. Truly. There is also the Jodhpur Fort that looms over Jodhpur the same way Table Mountain does over Cape Town and it’s said that there is nothing quite like it elsewhere in the World. I can confirm. The fort is also the best point from which to view the city. Its only when you’re way up in the fort looking down that you can see the Blue City in all its glory. I took a photograph but the picture in my memory is much, much better. A sea of blue buildings almost as far as the eye can see.

In Jodhpur I also met some interesting people, a tout named Nando spoke to me every time I passed his shop, insisted that he was the most famous man in India and found it alarming that I’d never heard of him. Nando eventually managed to get me into his shop. It was a spice shop and turned out to not belong to Nando at all but to 7 sisters. It could have been the intoxicating tea spices in the air (cinnamon, cardamom, ginger..) or the stories the spice sisters had to tell but I stayed for more than an hour. It seemed like every spice had a story and I listened eagerly as I sipped the most amazingly spiced chai. Ushu and her 6 sisters had taken over the family spice business after their father ‘expired’ a few years before. Considering that almost all shop owners in India (especially in a conservative place like Rajashtan) were men, this all-female business caused a stir. ‘Mohanlal Vehomal’ (the name of their father and the family business) mixes the best spices in Rajashtan (even the Lonely Planet says so) and others know it. Their 4 shops (in and around Jodhpur) are constantly targeted by vandals, and touts for other spice shops lurk around the market trying to lure foreigners away. The sisters work 7 days a week to keep the business going and get as much money into the family coffers as possible. With 7 daughters to marry off and 7 hefty dowries to pay their mother never lets them forget what a heavy burden she is carrying (they are carrying). It’s a sad story and their mother is by no means unloving when she says her daughters are burdens and Ushu and her sisters understand it’s just the way things are. If you are a woman you are a burden to your family until they can find you a husband (yes, arranged marriages still happen). Don’t misunderstand, not all marriages in India are arranged but the custom is alive and well in some homes. I was so moved by Ushu and her sisters’ story that I promised to return and stay with them for a few days. After Jaisalmer (my next destination) I would have to return to Jodhpur to meet up with the road to Mount Abu and I couldn’t wait to ask my many, many questions and to get to know all of them better.

That night Lucky came up to me and declared his undying love ..for the Yamaha and asked if he could take it for a ride. Of course. I gave Lucky the keys, told him to be careful and went to my room for a nap. About an hour later I looked out my window and saw Lucky washing the Yamaha, again. The next morning at 5am I left for Jaisalmer and Lucky had woken up especially to say goodbye to the Yamaha, and to me. Next stop, Jaisalmer.