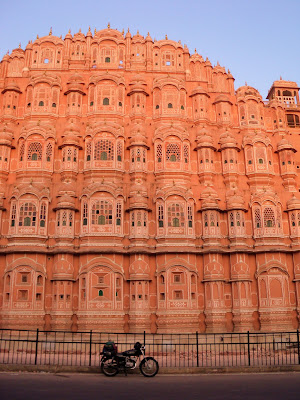 Again, let me say this, I am not a biker but* as I left Delhi for the second time on the Yamaha with the sun rising behind me, I felt totally alive. I had a permanent grin, butterflies in my stomach and a funky rhythm in my spine. The ride from Delhi to Jaipur (my first stop) was incredible. You simply turn onto the Jaipur highway and watch the landscape change. I was a little disappointed that the desert didn’t start the moment I crossed over into Rajashtan, it happens (duh..) gradually and you’re eased into it. The first thing you see, in abundance, is camels (I stopped counting after 83 because it became too distracting). The roads were better than those in the North and after 2 chai stops and 3 bathroom breaks I arrived in Jaipur, the Pink City. I’d forgotten how exhausting riding was and after I booked into my guesthouse I slept like a dead person for a few hours before I went for a walk through the streets.

In my guide book I read something very interesting. The best lassi in Jaipur, it said, is at a place called ‘Lassiwalla’ and is served in tall terracotta pots that you smash on the sidewalk when you’re done ‘but’ it went on to say ‘beware of imitations’. Needless to say ‘Lassiwalla’ was my first stop when I left the next morning armed with a map and a long list of places I wanted to see. It was easy enough to find but there was a problem, there were 3 lassi shops right next to each other, all named ‘Lassiwalla’ and all claiming to be ‘the oldest lassi shop in Jaipur’ or ‘the original lassi shop’. There was only one thing to do, I would have to try them all and decide for myself which was best. It was a tough job but somebody had to do it. First prize went to the Lassiwalla on the left. Not too sweet, ice-cold, delicious. Before I left Delhi, Shallu told me that Rajashtani dhaba food was the best in India and I soon discovered that she was not kidding.

But not all my experiences in Jaipur were culinary nor were all of them pleasant. On my way to the Hawa Mahal (photo), I walked past 2 school boys (about 16 years old) when the one closest to me suddenly stretched out his hand and grabbed me between the legs, just for a second, and continued walking like nothing happened. Shocked, it took me a few seconds to react and turned around just in time to see him high five-ing his friend. For a moment I considered going after the little prick and breaking his arm but I knew that would cause a scene and scenes in India always attract a lot of attention and I shuddered at the thought of having to explain (or mime) what had happened so I exhaled and I let it go.

Later that day 4 different locals (all decent, sincere looking middle-aged men) stopped me on the street and warned me not to speak to any of the young guys who would approach me, saying that ‘they are part of the Mafia, Madame’. Naturally I had many (many many) questions about the Indian Mafia, not least of which was ‘what on earth could the Mafia want with me?’ but I heeded their warning, if with a pinch of salt, and spent the rest of the day avoiding as best I could anyone who looked like they belonged to the Mafia and any and all school boys.

Before leaving for Pushkar, my next stop, I needed to take the Yamaha for a check-up. In Delhi I noticed that the speedometer was broken and I wanted to get it fixed before going any further. Having a broken speedometer provided me with some of the best laughter of my life because the way Shallu pronounced ‘speedometer’ was absolutely hilarious (putting the emphasis on every syllable but the right one) and I almost burst out laughing when the bike walla I took my bike to did the same thing.

Bike wallas are by far my favorite Indians. At first I thought they were going to be a problem for me because I knew I was going to need them often and I am, after all, a foreigner, a woman, easy prey. But I found them to be anything but predatory. With rare exception they were kind, respectful, simple, honest folk and treated me more like a sister than a customer. It always amazed me that they’d send me on my way with a brilliantly serviced bike, wishing me a safe journey waving as I left with obvious affection. I owe a great deal to all the bike wallas out there. Shukriya.

Along with getting the speedometer fixed I also had the Yamaha washed. It was an old bike and very dirty but it looked like new after its bath. The Yamaha shined and as I ran my fingers over the white letters ‘Y-A-M-A-H-A’ I thought of the crazy journey we’ve been on together. Just like me the Yamaha had little scars and bruises testifying to our adventure. There were white paint spots from when I parked it next to a building that was getting painted and the dent from when I rode into a bus and fell over. The ‘Y’ on the side of the petrol tank got scraped off slightly during the landslide up North and now looked like an ‘I’. I AM AHA. Yes you are, I thought. Yes you are.

This trip into Rajashtan was in many ways different from the one up North. It’s true that every Indian state is different from the next and of course landscapes and roads and people and cultures change but that’s not what I mean. It was me, I was different. I was just that little bit more experienced, wiser, focused and stronger. This time around I had more than just stubbornness and an adventurous spirit driving me on, I had a more than 4000 km portfolio of the incredible things I’ve done and seen. There was a quiet, calm confidence in me that was very different from my do-or-die determination at the beginning of this trip. It felt great. Next stop, Pushkar.

*Terran Williams (a pastor at my church in Cape Town/surfer) once said that the word ‘but’ is a powerful word because it neutralizes everything that’s gone before it and introduces a new, better reality.