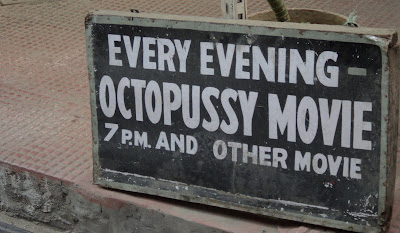 The road to Jaisalmer was long but I left before the sun was out, my MP3 player fully charged and I was making good time. If all went well I would reach Jaisalmer just after lunch. This is about as far into Rajashtan as you can go, beyond lies only the Great Thar Desert. The idea of reaching this final frontier was especially exciting for me but I had other reasons for looking forward to Jaisalmer. Samesyn. Sarah, a friend that I’d met in Cape Town, shortly before I left for India was going to be in Jaisalmer for a few days at the same time that I would be there. Sarah works in India and for months we kept missing each other (sometimes by a few hours) and I was looking forward to actually spending some real time with her. Her brother was visiting from London and the 3 of us were planning to, among other things, do a camel safari into the desert. I got to Jaisalmer a day ahead of them and spent it sleeping and asking around about camel safaris (prices and so on). The best deal was a 2 day, one night safari, organised by (you guessed it) Lucky’s cousin. When I arrived in Jaisalmer it was obvious that Lucky had phoned ahead telling all about my impending arrival. The words ‘Madam’ and ‘motorcycle’ were used in every Hindi conversation I overheard.

After Jaisalmer and a few days of great companionship with Sarah and Tim I headed back to Jodhpur for my promised visit with the spice sisters. Again there were many stories and lots of chai but soon the open road was calling me and I said my farewells to the sisters and their poor mother and left for Mount Abu. I decided to add Mount Abu to my Rajashtan trip because it’s a hill station (which means the weather is heavenly) and it sounded like the kind of place where peacocks roam around in the streets and people fly around on magic carpets. I was wrong about the magic carpets (and the peacocks) but right about the climate. Unlike the dry, intense heat elsewhere in Rajashtan, the weather in Mount Abu was deliciously moderate. The only thing, as far as I could tell, that bugged me about Mount Abu was that everybody in my guesthouse seemed to be on honeymoon and I became acutely aware of my single serving status. The owner of the guesthouse was shocked to hear that I was still planning to ride all the way to Udaipur, on my own no less (!) and told me to find myself a partner (clearly a honeymoon hotelier). I told him that was working on it (so to speak) and went to my room. The next morning, before the nosey owner or any of the lovebirds stirred I left for Udaipur, the most romantic city in India. On my own.

Udaipur was my last stop in Rajashtan and was a perfect finish to, probably, my favourite Indian state so far. The night before I left Udaipur for Mumbai I did something the Lonely Planet told me to. I watched the James Bond Movie ‘Octopussy’ at one of the rooftop restaurants while enjoying a meal. ‘Octopussy’, you see was filmed (partly) in Udaipur which is certainly not its only appeal but definitely adds to the charm of this exquisitely beautiful, and yes, romantic city. To my dismay, it seemed that all honeymooners in India, eventually, make their way to Udaipur and, it seemed, book themselves into my guesthouse, the Dream Heaven. Go figure.

It turned out to be an easy decision to not make the 800 km journey down to Mumbai from Udaipur (on the Yamaha anyway). The highway down to Mumbai runs through Gugurat (a state I had no particular interest in seeing) and I made up my mind to get to Mumbai ahead of schedule so I took the bus with the Yamaha, get this, tied to the roof (I have video footage for those who don’t believe me!). Anyway, while I watched the Bond movie, I must have eaten something disagreeable because the next day, on the bus, halfway to Mumbai, things inside my stomach went horribly wrong. To my horror (horror, horror!) I discovered that this particular bus did not have a bathroom. ‘No worries Madam, we will be stopping soon’ said the driver. Soon, I knew (in Indian terms), could mean hours! Perhaps I could sleep or meditate through the pain, I thought but spent the next hour viciously cursing Indian cooks, bus drivers, the Lonely Planet and James Bond until finally the bus stopped at a little roadside restaurant. The other passengers, also queuing to get off the bus, were moving so slowly that I actually considered climbing out of the window but composed myself enough to not scream at them.

After an agonizing bathroom episode I went to the counter and asked for some mineral water but before I could even finish my sentence I threw up. It was completely unexpected and I just barely managed to not do so on the shop counter but next to it, into an empty box. A large crowd formed around me, offering no sympathy or comfort only cold, curious stares. When I eventually stopped vomiting enough to stand up I had to look at the 30 odd spectators with a pathetic mixture of embarrassment and self-pity. Back to the bathroom. And then back to the bus. Only 8 hours to go.

Needless to say, I was a little fragile when the Yamaha and I got dropped off in Mumbai the next morning. The bus driver demanded another 300 rupees for off-loading the Yamaha but quickly saw that I was in no mood for any of that and let it go. It took me 2 hours to find the Colaba-area in Mumbai, which is where I wanted to be and another hour to find a decent hotel. Then I slept for the rest of the day, clutching my bottle of electrolyte-infused water tightly. At around 21h00 there was a knock on my door and, to my surprise, I got up to answer it. A very slick-looking Indian man with a huge grin and a gold tooth gave me a quick up-and-down look and breaking into a million rupee smile said ‘hey hey, so you want to be in a Bollywood movie, yaar?’. I looked at him, taking a moment to register and said ‘are you kidding?’. ‘Absolutely!’

*‘All is well’ is a very cool and clever catch phrase in one of the best (Hindi) movies I’ve seen called ‘3 Idiots’.