Delhi traffic and a series of very-near-death-experiences 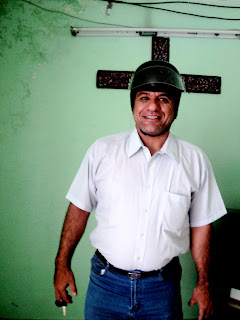 Joshua John, easily the coolest Indian guy I’ve ever met and pastor of Capital City Church, was the right person to speak to about riding a bike in India. He rode a Bullet from Delhi right down to the very south of India (about 7000km) with 2 of his friends once and made a documentary about it called ‘Highway Head Rush’. The first time I spoke to him about riding a bike but being terrified of Delhi traffic he told me that most foreigners he knew took a long time before they worked up the nerve to drive, sometimes, he added, only after a few years! I didn’t have a few years, I had a few days. In my mind I gave up on the idea and started researching train schedules and ticket prices. Then I met Jafar (photo) and his son Joseph.

Jafar and his beautiful Iranian family became my bike-and–everything-related godsends and helped me on my bike sourcing expedition. Within 2 days I found and fell in love with a beautiful Yamaha RX 135 and bought it (after Jafar bargained the price down a little).

Purchasing a motorbike was the easy part, I still needed to learn how to ride it and from the mad traffic I’d seen in Delhi, the idea made me go uncomfortably numb.

Jafar had a gentle nature but was merciless as he instructed me, later that day, on how to ride it. It wasn’t how to ride the bike that made me sweat (I’m not a biker but it can’t be that hard) it was the crazy sea of traffic that I would have to maneuver through that had me panicking. It was just after 17h00 (peak hour traffic) when Jafar told me to follow him through the traffic for a test drive and then promptly told his son Joseph and his daughter Mary * to get on the back with me. Panic turned into fear as I tried to kick start, balance the bike and my 2 passengers while trying not to lose sight of Jafar as he raced off on their family scooter. I had no helmet. In the delirium of becoming the owner of a motorcycle I had neglected to buy one. Helmets are compulsory only for men though but even then, most locals ride like rabied bats out of Hell without one.

So there I was, in the middle of the busiest intersection I’d ever seen, on a bike with two Iranian teenagers on the back trying to keep my mind and my hands steady. After 20 minutes of uneasy riding and the occasional stalling I managed to catch up with Jafar and asked if perhaps it would be better if I attempted this madness on my own first. He disagreed.

‘You need to learn control, sister’ he said. ‘If you got control, you take 4 people, 5 people, no problem!’

In that moment I cursed myself for choosing this madman to show me the ropes and as if on cue my heart started beating from a wild and unfamiliar place. Somehow, lost in the madness of a thousand hooting rickshaws, bikes and cars something took over and I steadied myself (albeit out of sheer terror). I saw an order slowly forming in the madness and I learnt an important traffic lesson, don’t be afraid to use your hooter. In South Africa, hooting at someone is an expression of severe disapproval at someone’s driving; here it is simply saying ‘I’m here’. ‘In India’ I would later here a local say ‘you have to make a lot of noise so people know you’re coming’

Jafar’s merciless method turned out to be the best baptism into India that I could have hoped for and I continued onward, a little less terrified, steady and with a helmet, of course.

Travelling by bike, I soon discovered, was not as easy as one-two-three-go and every day my list of things to organize became longer and more complicated. I had to travel light and in my backpack I had one pair of jeans, a few t-shirts, clean underwear, a travel towel, toothbrush, a sweater, riding jacket, a pair of sneakers and my Havaianas. In a smaller bag that I carried with me at all times I had my passport, money, camera, MP3 player and a pair of nylon riding gloves.

In an empty 10kg basmati rice-bag I had the following:

A few extra tubes, spark plugs, clutch and brake cables, spanners, screwdrivers and a bag of candles. The tool bag added another 7kg to my luggage and I soon discovered that I would rarely find the opportunity to use any of it (except for unnecessarily changing the occasional spark plug). India is far more bike-aware than South Africa and I could always find a bike mechanic without too much trouble.