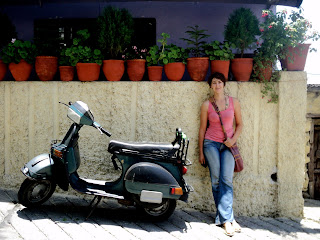 Early this morning, Shallu and I left for Mussoorie where we would be staying for a few days before Shallu returns to Delhi and I continue further up North. This time of the year, everyone in Delhi flees up into the mountains to escape the heat of the city and Mussoorie is the most popular spot. To get there you drive about 300km North of Delhi and then up, up, up 6000ft along a narrow, winding road until you are above the clouds and the air is cool and fresh. It’s a place that you simply have to see with your own eyes as no photograph will ever do justice, though I keep trying.

Shallu and I are staying in a little apartment with a breathtaking view of the whole town. It was a hard day of riding and I had energy only for soaking up the coolness and sipping a cup of cardamom chai.