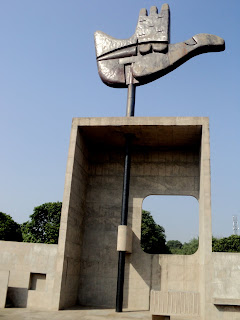 Ok look, I’m not a biker but ever since I was a little girl I dreamt about having a Vespa. Then I grew up and got a Vespa and I loved it but after two weeks on a BIKE-bike I’m thinking that if Vespa was my first love, then this must be my true love. I love I love I love riding this bike and today I had another 7 hours with just the open road and my thoughts. The road snakes through this beautiful country and I went up passes, through forests, past lakes, plantations and little villages where people stared at me with their mouths open. And all the time, I’m dreaming of what Chandigarh is going to be like. This was one of my top locations that I wanted to see and my next stop.

The city is famous for being designed (the layout and most important buildings) by Swiss-French architect, Le Corbusier. The city is very un-Indian (more like a cosmopolitan city) and I spent two days in architecture heaven.

I could not, however, for the life of me, find an affordable hotel but after another hard day on the road I was dead tired, in no condition to bargain, and wanted a bed badly. The good news is that my room, apart from having the most comfortable bed on the planet, also has a TV and I quickly turned to the football.

Before I left my country men were still undecided whether to be excited about the coming FIFA World Cup or annoyed by the endless frustrations caused by road works and a done-to-death ad campaign. Somewhere, as I was flying over the Indian Ocean their attitude changed and by the time I got to India my fellow South African had gone football bezerk. I sank into a deep FOMO (fear of missing out) and knew I was missing out on something extraordinary. The World Cup had never been hosted by an African Country before. India doesn’t much care for football.

I decided to make the world cup part of my schedule. While I had a TV I would watch Uruguay vs South Korea and then gun it to Shimla the next day to catch the England vs Germany game. I assumed that our own team, Bafana, didn’t make the cut, haibo.