Up North we go forth 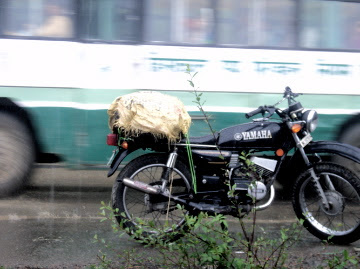 Now that I had a bike and conquered my fear of the traffic I could finally start planning my trip. After speaking to some of the locals I decided to make my way up North, up into the Himalayas for the first leg of my journey. I ended up staying 2 weeks in Delhi and was very ready to trade the crazy hotness for the open road.

Though I was ready to clock some kilometers I was still waiting for a few final details to come together. My insurance for the bike hadn’t been issued yet and I soon discovered that everything in India takes “just a little more time, Madam” and I reset my bio-clock to India time.

I also picked up a passenger for the first few days of my journey. Shallu, a tiny, shy Indian girl, who works at the learning centre, asked if she could join me for the first few days. She was the only one that was authentically excited about my plans and somehow worked up the nerve to ask this pale stranger if she could go with. Shallu only wanted to as far as Mussoorie (a hill station just North of Delhi and a two day journey by bike). I loved that she was excited, spontaneous and, most importantly, weighed almost nothing. But, though I was willing to risk my own life for the sake of adventurous exploration, I was not comfortable with risking hers.

In the end I yielded and told her to get a helmet for the trip (non negotiable) and started packing. I suddenly had something I didn’t expect, a witness to the madness.

In Delhi the days are short but the nights are endless. Like everything else, the heat is to blame for this. It’s too hot to sleep at night so most people stay awake until the early morning. This means that the city only wakes up at around 11h00. I discovered this when I rocked up at Delhi’s famous Sora Jinni market at 9h00 but only after 2 hours did I see any sign of life. Like the rest of Delhi I didn’t sleep well the night before and had a cat-nap under one of the trees outside the market (somebody’s husband perhaps).

When the market finally did open I was treated to a chaotic, beautiful.. Everything is so much cheaper and I had to resist buying everything I laid my eyes on reminding myself that I had to travel light. Of course, I’m only human and didn’t make it out without buying anything and trying my hand at bargaining. All in all I did fairly well despite still being charged my usual skin-tax.

As much as I love the city, I also love leaving the city. I’m referring of course to my city, Cape Town. Whenever I drive out of the city I feel like I’m taking the first deep breath in a long time but, without fail, whenever I drive back into the city again I feel like I’ve come home. I have never, though, wanted to leave a city as badly before as I want to leave Delhi. Not that I don’t like this crazy city, I do, I do, I do, but the cool crisp mountain air and the open road is beckoning.

Despite the insurance delay it seemed that Murphy and his law was determined to make everything go wrong. Just as I was having an intense, internal moment of doubt and was about to call the whole trip off, my clutch cable snapped. It should have been the camel’s back snapping but it put things into perspective for me. Surely I didn’t expect things to be easy. After that I relaxed into my, albeit much delayed, adventure knowing that it only really starts when something has gone wrong.